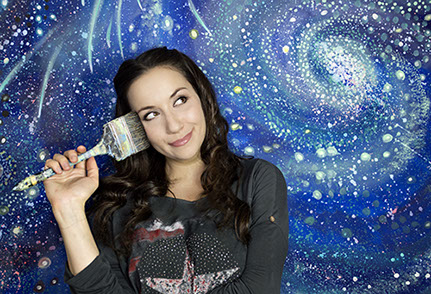 Bella Volen is a Vienna-based academic professional interdisciplinary visual artist, who works worldwide as an artist and art instructor.

Bella works with different media as chefs use diverse flavors.

Her focus is mainly on canvas painting, human transformations through body painting, photography, and video. They are often connected and presented in a melting pot of all these elements through augmented reality. It is about a total work of art and meeting point of classical art and modern digital technology. A painting can be scanned with an augmented reality application (Artivive) and the observer sees an art video and music connected to the painting. Some of the canvas paintings are also ChromaDepth 3D paintings.  Through the special Chroma Depth technology and Chroma Depth 3D glasses, the painting becomes multi-dimensional.

Another important part of her work is commission illustrations, murals, performance, installations. Furthermore, she has experience with stage design and stage costumes.

Here you can read more about her artworks.

In 2009 after a trip to Shanghai, Bella came up with an idea and this idea became a new art form and direction called: Paintloon- there where balloon sculpting meets paint. The result is painted balloon sculptures or costumes, often combined with LED light.

Bella has a master's degree in painting and has been awarded 18 prizes at competitions all around the world, a lecturer at the World Bodypainting Academy, judge, and curator of projects and competitions.

Coming from an established arts family in Sofia, the capital of Bulgaria, Bella was born in 1982 and was raised as a third and sixth-generation artist among painters, sculptors, dancers, and poets.

Her natural talent was supported with thirteen years of formal study in some of the most prestigious art institutes including the fine arts secondary school and the Academy of Fine Arts in Sofia. In 2003 Bella moved to Vienna, where she has studied painting at the University of Applied Arts.

She is currently writing a book about the ritual body art history, which took many years of research.

Since 1998 her works have been exhibited in Bulgaria, Austria, Germany, England, China, South Korea, Thailand, USA, and Venezuela.

the nature of chanoyu (tea ceremony)

say it's the sound

"I love very early mornings and late nights, the smell of rain and conifer trees, cherry blossoms in the spring, pumpkins in the autumn, high mountains and blue seas, modern technology and old places lost in time, brave people fighting for their dreams, but also finding time to support others and contribute to society.

Every place, city, country is a garden, which can be formed by each one of us. All we need to have is the conscious mind of a gardener, time and desire for a change, guts to give it a try and be a player, not the ball."

2002-2003  Study of graphic arts and printmaking techniques at the National Academy of Fine Arts , Sofia,

Prize of Excellence/ Award of Distinction from ART NOW 3: The 3rd Annual Juried Contemporary Art  Competition. Included in " Art in Vogue 100 Contemporary Artists" a quality art book in Masters of Today series. The book was released in 2011 in print run of 25,000 copies.

2013- Encyclopedia of The Fantastic Artist, Austria

2012- The Art of Body Painting, The Netherlands

2012- The Art of Body Painting, Niederlande